Civ stage continues the RTS gameplay with a watered down version of the Civilization series. This is kind of an interesting stage, don't get me wrong, but it's still piss easy. After you graduate from being a tribe, you begin to set your eyes on the stars and start moving to conquer the entire planet through whatever means necessary.

There are three main civ types corresponding to the three ways you can take over the world, Religion, Barter (economy?), and Military. Religion and military are basically the same thing, utilizing their vehicles to head over to cities and slam them with upbeat religious music or downbeat bullets and bombs until the city gives itself up to you. The only real difference I can remember between the two is that Religion is more effective if a city is more unhappy. It's somewhat ridiculous that two completely different methods work in the exact same way, you can literally blow people up by playing enough music at them. 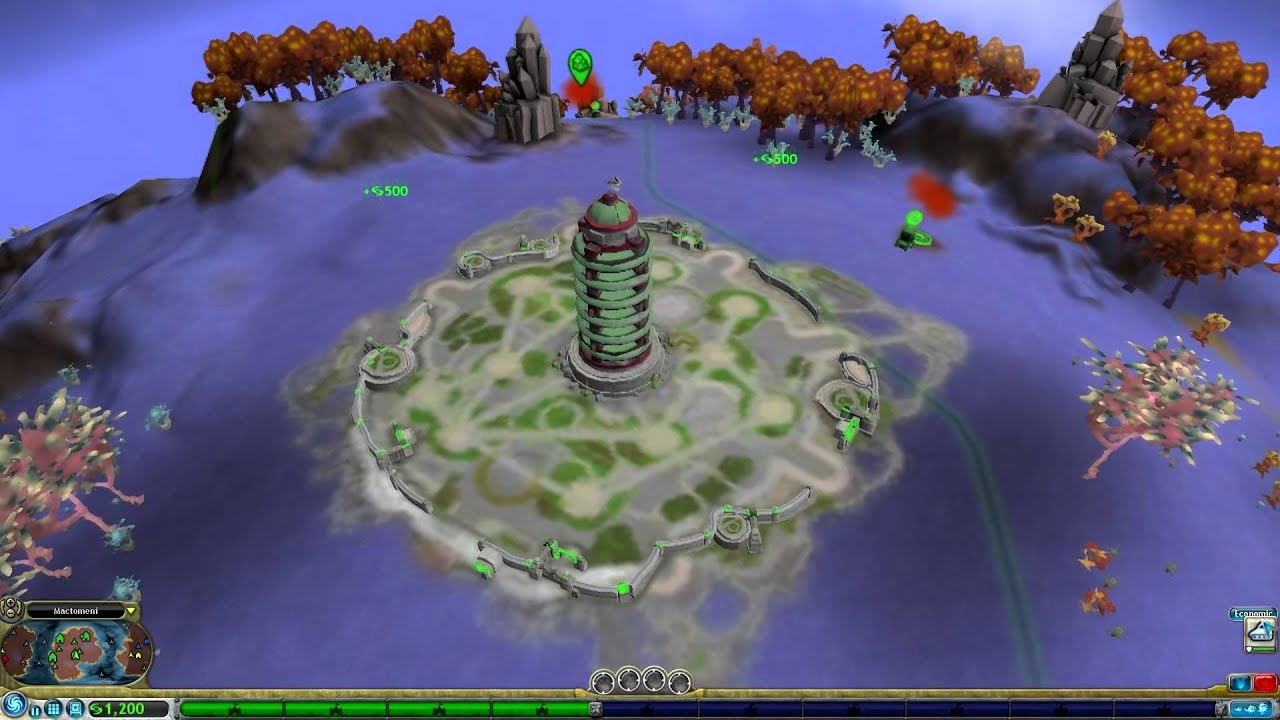 Happiness is determined by buildings in cities. There's three types of buildings you can create, housing, entertainment, and factories. Factories cause unhappiness but produce money, entertainment causes more happiness if it's placed near housing and away from factories. You'll want at least one happiness per city, because even if you don't have any religious opponents it'll give you more money overtime than an unhappy city from their little celebrations. There's also turrets, but those have their own spaces and all they do is shoot at your opponents.

To do your bidding, you have three unit types. Yes, three. A very deep RTS, you can tell. You can utilize land vehicles, air vehicles, and sea vehicles to get around and trade/fuck people up. To get these vehicles, you have to actually create them in around 3 different editors that the game throws at you back to back. You also have to create your own buildings in the city, with another 3 editors. There's so much fucking editing in this stage that it starts to become creatively exhausting to do fucking anything with anything.

To build shit, you get money. To get money, you claim spice mines all over the map. The AI needs these spice mines too since it can't just pull money out of thin air, so owning more spice mines essentially means controlling more territory without explicitly having to take over cities to do so.

So here's a funny thing. The building editors don't change the buildings any gameplay-wise, but the vehicle editors do. You balance them between speed, health, and the power of their specific ability (like how powerful their religion chords are in brainwashing the gullible masses). One thing that the people making the game didn't seem to think to check for was what would happen if the player changed their vehicles while they were out on the field. The answer is that you get the most abusable shit in any RTS I've ever seen. You can max out speed on your vehicles, send them over to take all of the spice mines on the map, send them over to the opposing cities, then swap them out for something maxing out religious power and take them out without having to worry about "balance". The fact that nobody caught this in development is ridiculous, you'd think that'd be the first thing they'd worry about people doing with an editor like this.

Civ stage has really, really, really basic diplomacy. It's better than tribal stage, which was abysmal, but it just lacks punch. You compliment people to make them like you, if someone goes to war with you you can just give them a bunch of money until they don't hate you anymore.

One noteable difference from tribal stage is that opposing civs will actually interact with eachother. It's no longer you and all of the people that hate you, while you're waging war on one place two different AI will be waging war in two entirely different locations. They'll also occasionally try to get you involved in their wars. Trying to be Switzerland and say "no" will make them hate you, and saying "yes" brings you into their pointless wars, so it's a lose-lose situation.

Being BFFs with everybody is the best way to win via economics, since it doesn't take very long at all to scam everyone out of their territory. Getting as much money as possible is also good, since money raises relations and can also buy a superweapon (decided by your starting civ-type) that instantly wins the game.

I assume they weren't aware how players would solve stalemates with an equally powerful empire after the dust settles from the initial scramble, so they just said "fuck it" and gave you the option to instantly win the game if you had enough money to do so. A very not-thrilling conclusion to the civ stage. If you're not using the superweapon, you'll likely just be bribing the final civ with thousands of dollars in cash until they agree to join you. Either way it's fairly anti-climactic since war is always more costly than just being a friendly friend.

Abuse mechanics, money-starve opponents, and right click on city to win the game. This is what religion and military cities do.

I think I mentioned it up before but I have no idea why they couldn't think of a better gimmick for religious cities. Religion is 'green', meaning it's the friendly option, but being religious seems to be anything but in this case. Using religion is essentially murdering people with music and making them unhappy until they join your cult. There's probably someone saying "but that's EXACTLY what religion is!" right now, but that's not really the point I'm making. The point is that the playstyle is way too close to military despite the fact that it's supposed to be a completely different option. To start out as a religious civ, you had to be a friendly friend in the tribal stage. It's a baffling whiplash.


So after you turn the planet into one country with no separate tastes, cultures, or languages, it's onto space to do the same there.