So, you've eaten enough and can evolve from cell. The way they evolve you is probably the dumbest thing ever, and a real indicator for how much content got cut in the final release. Essentially, you take your cell... and slap legs on him. Then he swims up to the surface. You literally just move from being a cell to a full blown land creature. It's fucking obnoxious, to say the least. It's a game about evolution and they're skipping all the interesting bits of evolution. Shouldn't we have an interim period where we'll play as a sea creature instead? Well, that was going to be in the original game, but was cut because it didn't work out. A lot of things got cut. Oh well.

So, big point of the creature stage is that your species is now an animal, and they're going to do things that animals do, like build nests, hunt, and (as you expected) sing and dance to other animals. Like in the last stage, you have three choices to make, you can either be a friendly creature and ally with the majority of the nests you meet, be a hunter and drive most of the creatures you see to extinction, or an inbetween route. Again, not much choice, really, especially when you consider that being friendly is objectively the best option you can choose.

You don't really lose anything by being friendly and only killing creatures innately hostile to you. Being an asshole makes life a lot harder, since you'll have less friends to fight the assholes who'll inevitably be tougher than you, and you won't be missing out on any points or parts by being friendly. It's also a lot quicker, usually you only have to "impress" three creatures in a nest in order to ally with them. And, if you do want to be a murderer, being a friendly guy is STILL the better option since you can ally with 'rogue' creatures who are so strong that they'll curb-stomp anything that isn't an epic.

Epic creatures are basically dinosaurs btw. You can't be friendly with them and you get fuck all for killing them, and you can't become them either. So they're just there to be a gigantic pain in the ass, really. These ass pains continue way up into the civ stage as well, so there's never any mercy.

Strategies don't really change depending on which creature you're facing. You'll generally either be mashing your combat abilities or hanging back and letting your buff friends take care of business for you while you spit acid from afar. If you want to ally them, it's generally just a matter of hoping that you and your pack have high enough social skills to match their Simon Says. It's fairly repetitive, and there's not much danger to be had in a lot of it.

So, that's the creature stage. Incredibly simple, incredibly boring. There's a few other things, like migration, but that's more just window dressing to the main mechanics. I can basically just sum up migration as "migrate next to the water for maximum benefit." Now what about that amazing creature creator?

The biggest and most important part of the creature stage is the creature creator. This is the stage where you will decide what your species looks like, and this will carry over into the next 3 stages without you being able to change it. You can freely use the creature creator as much as you want during this stage, but after you evolve you won't be able to access it. 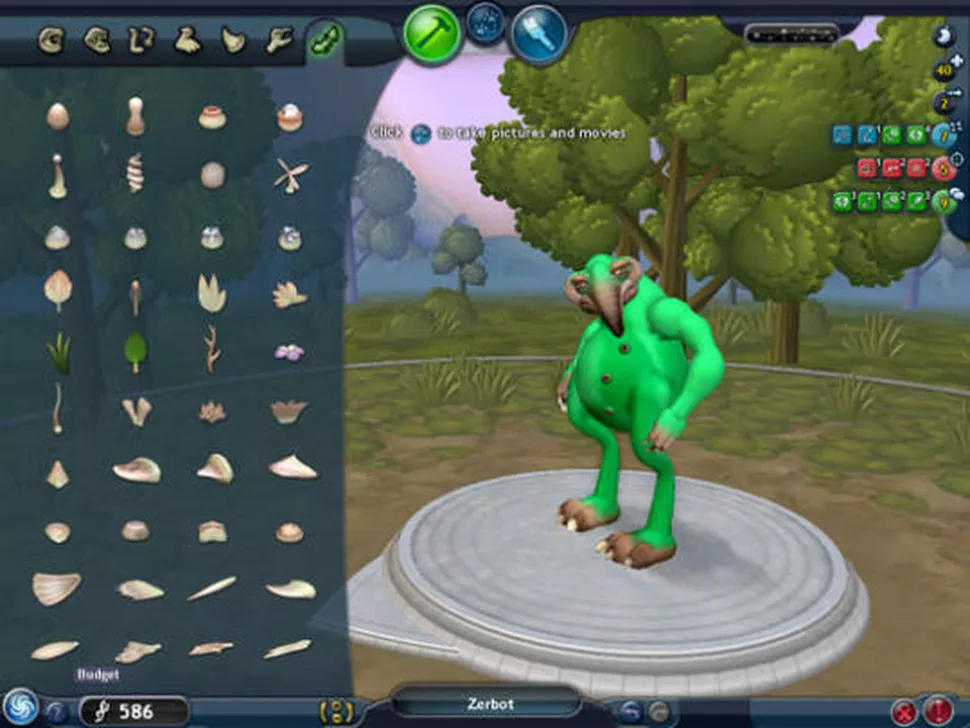 It's probably the most interesting creator in the whole game, since instead of designing some forgettable piece of crap vehicle, you're actively designing the creature itself, which is much more important. Pretty much anything you'll create will look alien as fuck, due to the parts, colors, and general body shape of the thing you'll be creating. I created an entire alien species that was comprised of homosexuals. Or, at least, I think it was, as far as I'm aware your species only has one sex and you're always the one laying eggs. The lack of any sort of sexual dimorphism seems like an odd limitation for this editor to have.

Lack of sexes is hardly the weakest part of the creator though. There's two big fundamental flaws with it that prevent it from being very fun. The first is that the part limit is way too low to get interesting. You'll hit it faster than you can possibly imagine, so the more exotic types of creatures you'd be able to make won't really end up as you expect. You already have to worry about the obligatory things to put on your species, like arms and legs, and when you're done putting on everything you'll want that has gampelay effect, you'll have relatively few slots left to make the species unique.

The other big flaw is that the creature editor is filled with things that are objectively better than other things. Why get hands with pose 1 when you can get the ones with pose 5? The only difference is the DNA cost, and DNA isn't hard to get at all. Any optimized creature will generally end up with the same parts that make the most out of what you're given, by raising every stat you'd ever want to 5. There's very little to specialize with, like flight, which is mostly limited to "gliding". You're mostly just going in and out of the creature editor to swap out your redundant parts with ones that are objectively 10x better. It's quite limiting to the choices you can make with your creatures outside of sandbox, since you'll want your creature to be as powerful as possible, but you're not sacrificing anything to get that power (other than DNA, but DNA is unimportant and is only used in the creature editor.)

Again, these sorts of things were planned for the game, but they were cut out. There was a 'flight' stage you could take here if you were making an avian creature, and it was cut. There was more complexity to how creatures could be built rather than "swap out sing 3 mouth for sing 4 mouth", but it was cut. It was all cut. Now we get this vague RPG shit in place of what should've been a proper alien creator.

Oh well. There's still fun to be had in it, it's just inherently limited.


In any case, after you blunder through the creature stage by doing the same thing over and over and over again, you can move on to the tribal stage.